A Rockefeller Lost to Cannibals?

The Search for Michael Rockefeller 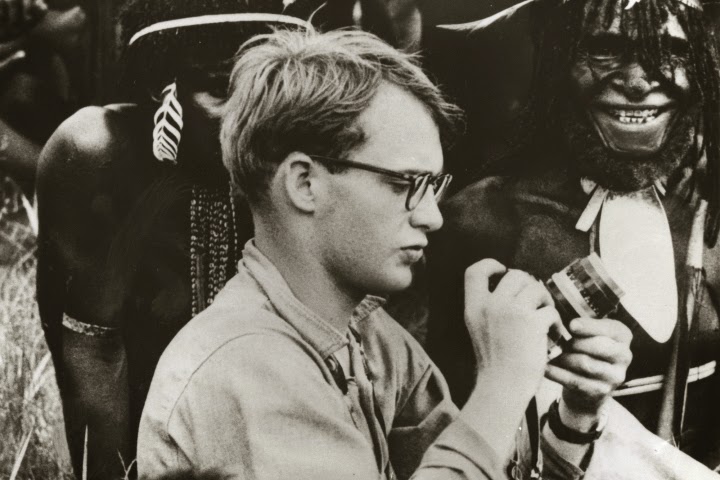 What happens when you craft a film about a rich and sensitive young lad from an iconic American political family who disappears from the planet and it’s likely he was stabbed, beheaded and then ritually eaten by cannibals in 1968?  Better still, unlike any vampire flick, this one is true? Netflix just released such a documentary film, The Search for Michael Rockefeller, a Fraser C. Heston film from his independent studio Agamemnon Films. If you’re a fan of real unsolved mysteries as I am, then ROCKEFELLER is for you. I’ve watched it three times on NETFLIX and still cannot make up my mind about what actually happened to former Vice-President and Governor Nelson Rockefeller’s youngest boy, Michael. Heston’s film doesn’t solve the mystery. It meticulously and cleverly narrates the mystery letting you be the judge of the evidence. 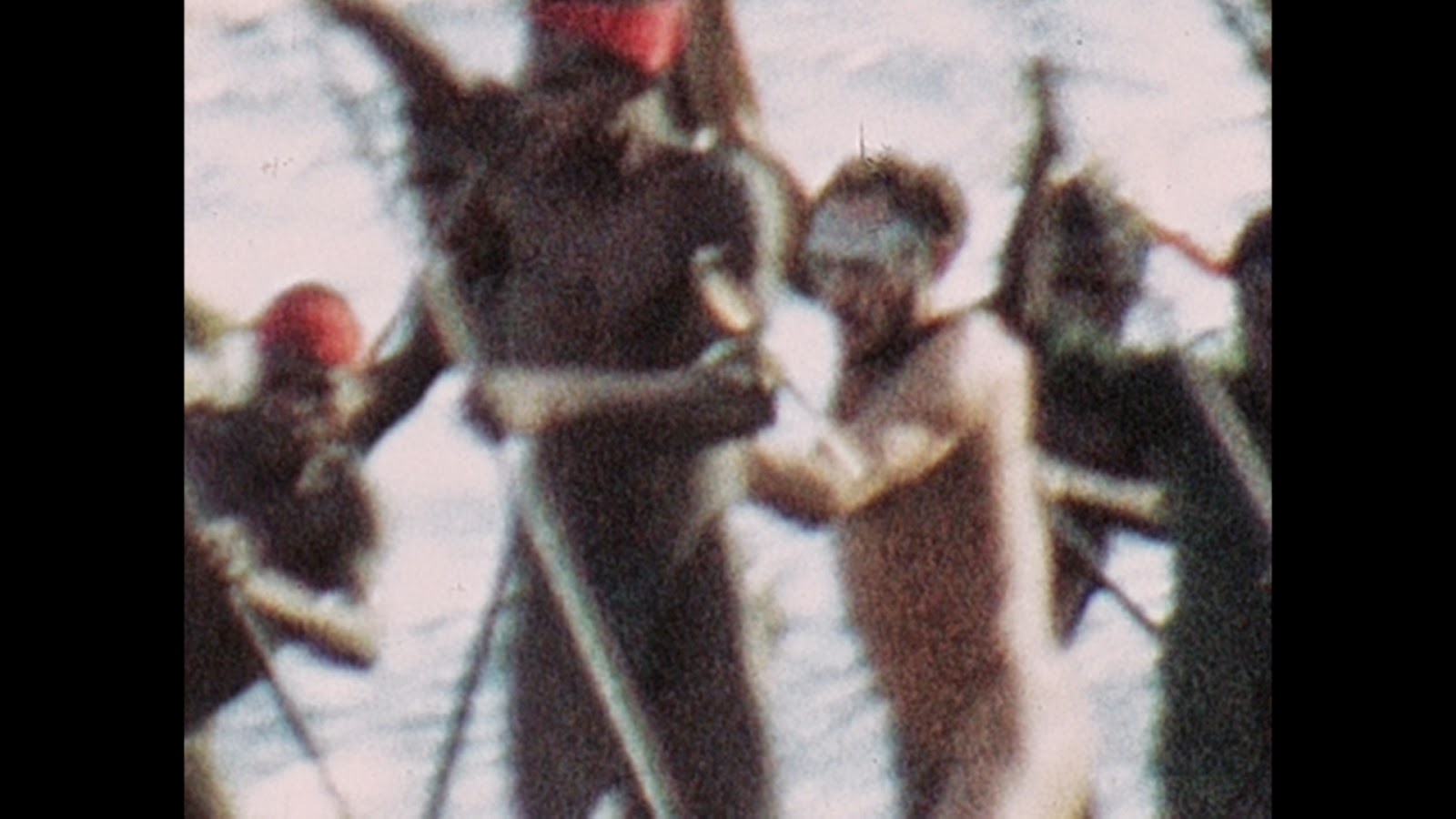 ROCKEFELLER is a powerful mystery with riveting twists and a dazzling WTF ending. In fact, the ending makes you re-run the film immediately if you have the time. I did and the more times I watched it I found the film made me doubt how I look at evidence for claims about missing persons. If you love detective mysteries, you’ll love ROCKEFELLER. That’s because the film makes you the chief inspector. 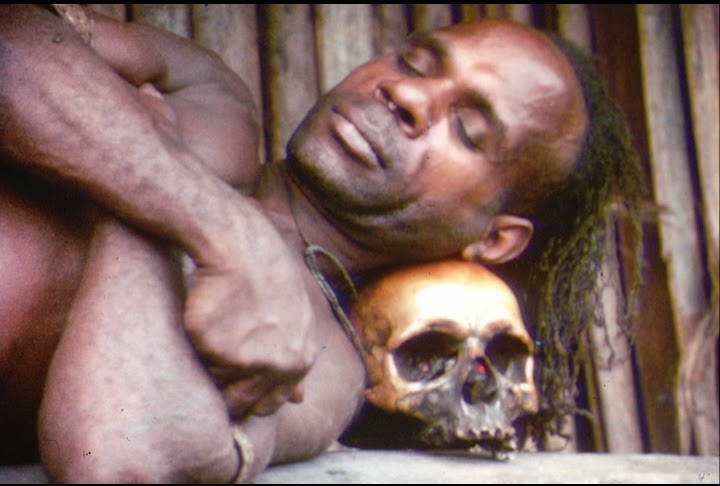 While the facts of the mystery are pretty straight forward, the solution is still a puzzle wrapped in an enigma surrounded by an unsolved mystery.  Fancying himself an anthropologist fresh from Harvard, rich young white boy runs away from politically powerful daddy to photography artwork of the Asmat, a notoriously violent coastal New Guinea tribe of cannibals. His canoe capsizes at sea. He tells his lone companion “I think I can make it!” He jumps into the sea swimming to land off in the distance and, surprise, surprise, he’s never seen again. Not a trace. Nothing, even after rich daddy deploys massive search and rescue resources for months in the area. Nothing! Then the rumors start to swirl: rumors from the native porters who made the swim successfully, rumors from the lone companion, a Dutch anthropologist experienced in the area, rumors from a Dutch priest (there’s always a meddlesome priest mixed up in these sorts of things) rumors from local constables, rumors about sightings here, there and under every hut, rumors about rumors. No hard evidence to confirm or disconfirm any of these rumors. 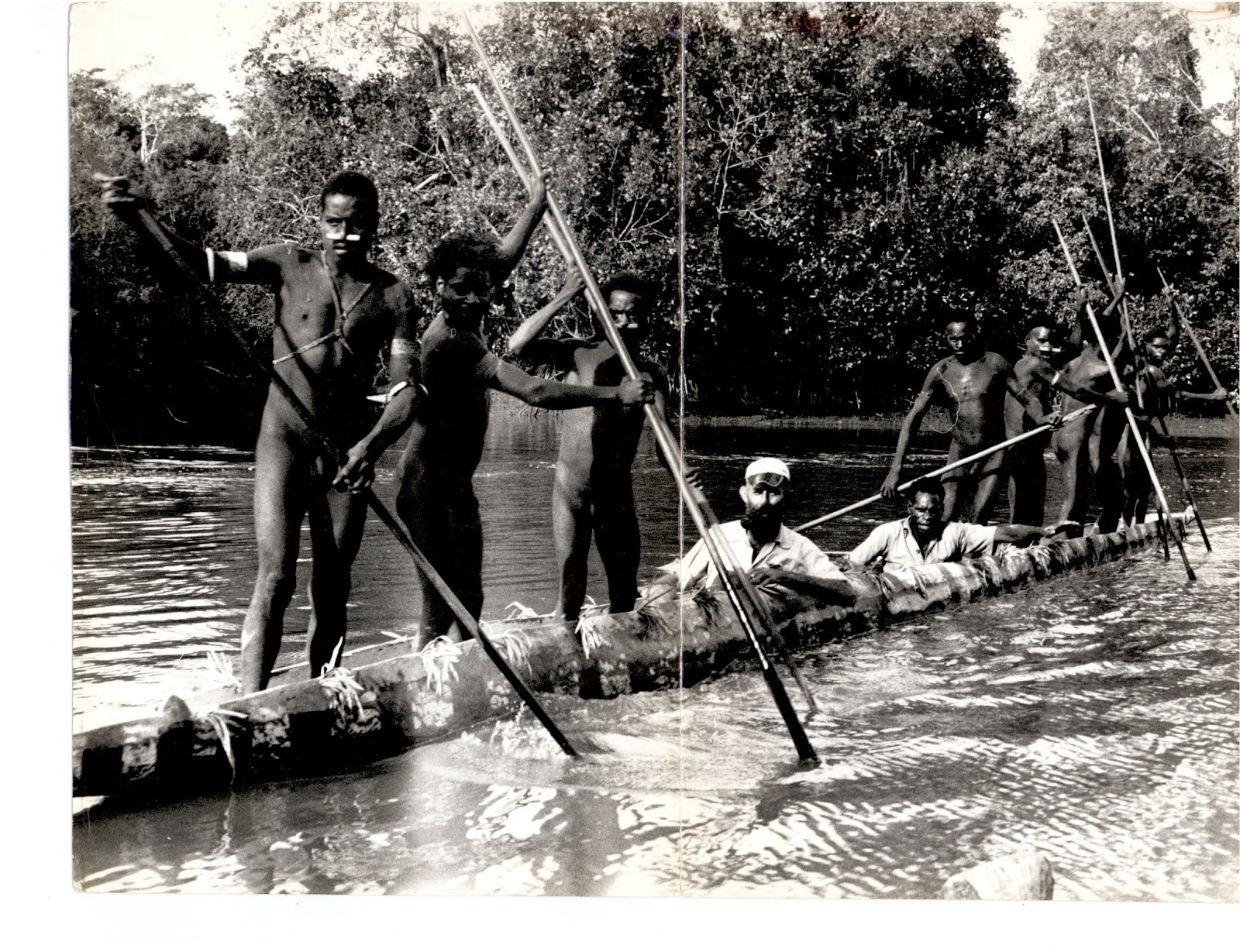 ROCKEFELLER is cinematic master craftsmanship of false hope, suspicion, rumor, conjecture, cover-up, and barbarism. Michael, the Dutch priest and the cannibals are not the only characters in this film. There’s a dodgy Aussie that lights a fire under a photo magazine editor sending him on a wild-goose chase in search of a Rockefeller lost.  Milt Machlin, editor of Argosy magazine and the man who coined the term ‘Bermuda Triangle’, actually shot all the ten thousand feet of 16mm footage Heston uses to craft this documentary except for some mandatory newsreels for context. And that’s a back story to Heston’s film that’s almost as amazing as Michael’s fate itself. 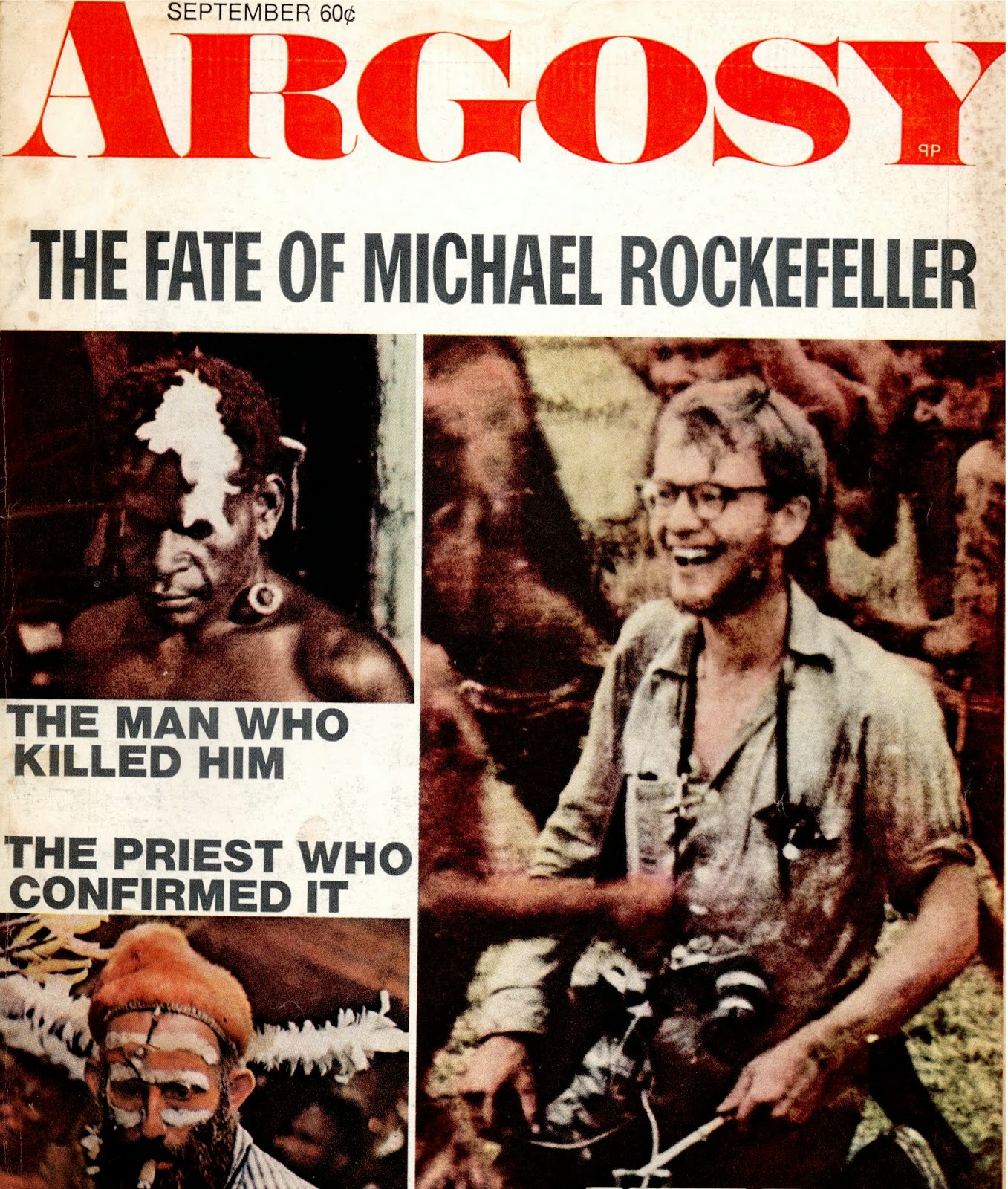 In 2009, Heston was researching a possible feature film on the Michael Rockefeller disappearance when he discovered Macklin’s footage in a Vermont Warehouse. A few months later ‘a movie in a box’ arrived at Agamemnon Films, a production company Fraser C. Heston established with his legendary father, Charlton Heston in 1981. Usually, filmmakers go find their films.  Not this one. ROCKEFELLER is a film that found its director, literally.  But Machlin's footage was in a thousand pieces mostly without audio. Making a movie out of this box of tangled footage required both patience, perseverance and craft. Fraser C. Heston’s pedigree as a filmmaker shows as his father always announced before any screening of their work. "A film is only as good as its ability to tell a good story.” Heston’s ROCKEFELLER is powerfully riveting and exquisitely crafted. First-Rate, enjoy it on NETFLIX now. Here's the link:
WATCH ON NETFLIX NOW

I hope you will leave a comment regardless of content...I learn something from all comments regardless of agreement or disagreement.

Thank you for your kindness.
--- Mark McIntire

Popular posts from this blog 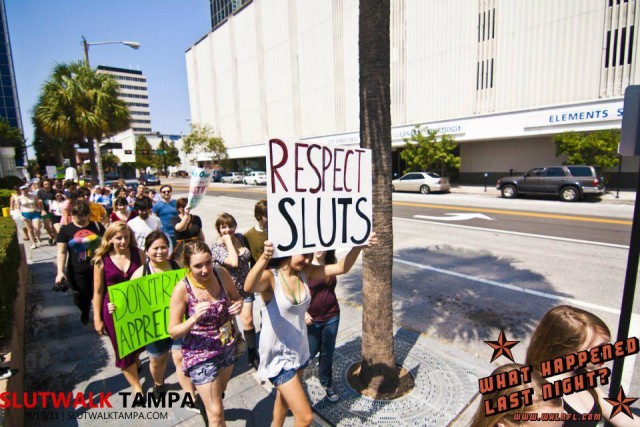 in·fan·til·ize Verb: past tense: infantilized; past participle: infantilized 1.    To treat (someone) as a child or in a way that denies their maturity in age or experience: "seeing yourself as a victim infantilizes you" __________________________________________ Tom Brokaw’s Greatest Generation was replaced by LBJ’s , Welfare Generation that was replaced by today’s Infantilized Generation .  Our tech-savvy, globalized millennial population want to be the Virtuous Generation  enlisted in an international army of 'social justice warriors' fighting evil white male capitalist Christians , but I’m skeptical. The failed liberal internationalism of Jurgen Habermas has finally run out of oppressed minorities to save from systemic oppression.   Yes, they aspire to virtue but are without compass or portfolio. Worse, their parents and teachers keep them infantile with little drive, fewer skills, failed education, compiled loan debt, ‘selfie’ guided, with no rea
Read more

The Last Pope Is The Next Pope 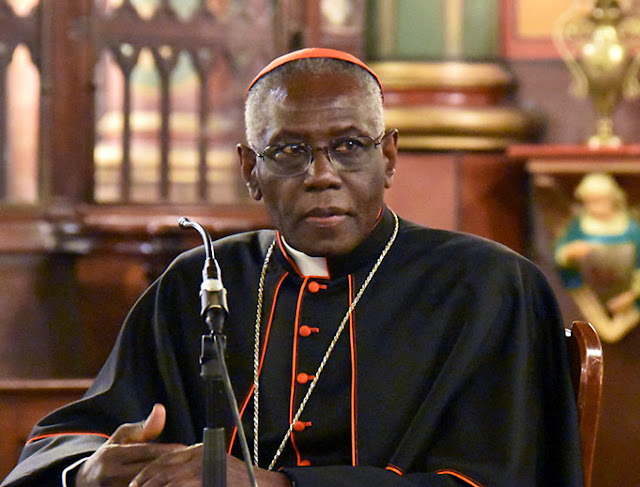 What's next after the massive systemic cover-up of clerical pedophilia by the Catholic hierarchy? The next Geo-political earthquake is the unavoidable abolition of the Papacy itself. The Roman Catholic Church created the Papacy, and the Roman Catholic Church can abolish it. And, it will. Soon. The next Pope after octogenarian Francis I will be the last Pope of the Roman Catholic Church. Moreover, the word ‘Roman’ will be dropped from the brand name. Clerical offices of Cardinal, Archbishop and Bishop will also be extinguished. Local parish laity will choose their clerics who will be immediately accountable to them. Clerical pedophilia will soon have no place to hide. That last Pope will be from Africa. His name is Robert Cardinal Sarah of Guinea. Once elected, Cardinal Sarah will take the name ‘Pope Linus II’ after Pope Linus I the very first Pope if you exclude Saint Peter from the calculus of Popes.  There are several sound reasons why this will happen.You may recall my b
Read more

The Meddlesome Priest
My TVSB program is called, FREEDOM MATTERS with Mark McIntire. It consists of Interviews with Defenders of Freedom Our program features interviews, one-on-one, with invited global cultural influencers such as Troy Worden, Michael Shermer, Jason Hill, Seth Gruber, Celeste Barber, Jordan Peterson, Heather MacDonald, Fraser Heston, Curt Levey, Elon Musk, Camille Paglia among others. Each interview, in conversational ‘Bill Buckley style’, will focus on the fundamental principles of our Constitutional Bill of Rights both affirmatively and negatively. Philosophy professor Mark McIntire, and guests will drill down into the conflicts between legal, social, economic, academic freedoms as they rest on the Bill of Rights. Guests are renowned for their cultural, legal, philosophical, political, and academic influences